Kato Lampo Waterfall - Everything You Need To Know Before Visiting The beautiful Kato Lampo waterfall with its water cascading down the terraced rock formations is an amazing sight to behold.  Located in the village of Beng Gianyar, approximately 40 minutes from Ubud Center, this waterfall is also very easy to reach.  Unlike other waterfalls, you don't have to go through miles of hiking and trekking.  Within 15 minutes, you will arrive at the location of the waterfall.  Kanto Lampo's slightly under-the-radar location adds to its uniqueness. 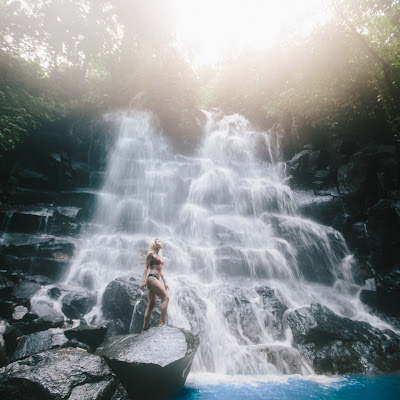 The source of water unlike other waterfalls in the Bali region is the dam and this waterfall is completely new.  But the establishment of this new waterfall turned out to be a boon to the local villagers.  Because many tourists come to visit this waterfall, the income of the villagers has increased slightly.

If you're a photography buff, you can climb the rocks above the falls and get some great, instagram-worthy photos.  You can also buy some snacks and drinks from the parking lot to take to the waterfall site and enjoy your own little picnic. So, if you want to visit this Kanto Lampo Waterfall, here is everything you need to know, but feel free to skip to whichever section interests you.

Kanto Lampo Waterfall is located in the hamlet of Kelod Kangin, Beng village in Gianyar, Bali.  It takes about 1 to 1.5 hours drive from Ngurah Rai International Airport Denpasar.

You can reach it in less than an hour's drive from Ubud.  It's easy to get to the falls from the village, and the terrain is gentle enough even for novice hikers.

How to Get to Kanto Lampo Waterfall:

Kanto Lampo Waterfall may not be one of Bali's most famous waterfalls, but it is still the perfect stop to include on a day trip from Ubud. Hidden in the jungles of Bali, this beautiful waterfall is a peaceful escape. An ideal day trip itinerary from Ubud would combine a visit to Kanto Lampo with the famous Tukad Cepung Waterfall, Tibumana Waterfall and Tegenungan Waterfall, Tegalalang Rice Terrace, Mongkey Forest Ubud and many more.

The road to the waterfall is very close to the village. Make this waterfall has a different impression. The specialty of this waterfall is the random black stones arranged randomly. The water that falls on the rocks makes its own beauty as if the water reaches all corners of the rocks.

Previously the water that now partially flows over the cliffs was used for irrigation of agricultural land. On top of the cliff, there was a water irrigation canal but now water was also gushing non-stop over the cliff.

Things to Do in Kanto Lampo Waterfall :

Kanto Lampo Waterfall has a lot to offer. You can spend a great day there and enjoy the best activities nearby. The best thing to do once you reach Kanto Lampo Waterfall is that you can swim, soak in the water. And you can even take pictures on the famous rock, or you can take a walk in the forest and explore. On your way to this jungle waterfall, you'll feel like you're heading off the beaten track.

Although Kanto Lampo Waterfall isn't very famous for its spots, here are some tips to know before you get there:

For the best views of Kanto Lampo, you'll need to enter the river, so make sure to wear a swimsuit! This will double as a great photo opportunity on the beautiful rocks at the base of the falls.

Make sure to be careful and take your time if you climb on the rocks, as they can be very slippery. This is a great place for photos but not worth getting hurt!

Any shoes are good to wear to get to the falls itself. It's easier to climb onto the rocks if you're barefoot or with water shoes.

There are locals ready to help with anything you need – whether it's descending to the falls or taking photos. Tipping is not mandatory, but if the locals help you with taking photos then it is common courtesy to give a small amount of money in return.

A map is required as this is not one of the most famous waterfalls around. So, not all taxi drivers will know the route here. The location to type on Google maps is “Kanto Lampo Waterfall”, so use this for directions to the waterfall. If you don't have mobile data to use google maps, we recommend using maps.me – an offline map for your phone which has the correct location for Kanto Lampo Waterfall. 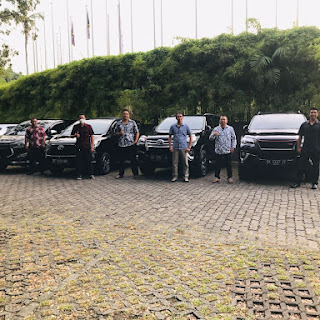 Bali Vacations - Hiring a driver in Bali can be an affordable way to travel around the Bali island. It also gives you the opportunity to ex...